The Wrong Side of the Tracks: Origin and Meaning

Meaning
This idiom is also often heard as ‘on the other side of the tracks’ and used to refer to a part of a town or city that is particularly poor and, as a result, is dangerous or unattractive to spend time in.
Origin 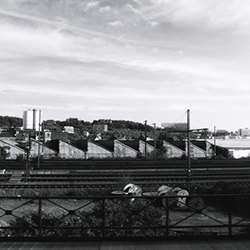 The true origin of this idiom is a point of debate. Some claim that it derives from the fact that in the time of steam trains, the wind blew the soot from the train to one side of the tracks (the railway tracks) meaning that one side would become more polluted and, in turn, this side would then become the poor, industrialised area.

However, others, including the etymologist Christine Ammer, who put together the American Heritage Dictionary of Idioms, refute this as the true origin arguing that at the time whole towns would have felt the effect of soot as everyone had coal fires so it was not just an affliction of the poor. Instead, Ammer suggests that the phrase originates from the fact that in 19th and 20th century America, when some of the first long distance railways were built, they usually went through the middle of a town and thus formed a visible divide between the residential and commercial areas of the middle and upper classes and the poor, industrial areas in which the working classes lived. The upper classes are then believed to have made the distinction between the two sides of the (rail) tracks labelling the poorer side as ‘the wrong side of the tracks’.

This explanation is in keeping with the origin and meaning of other similar idioms such as ‘the wrong side of town’, ‘the wrong side of the street’ or even the phrase ‘to be born on the wrong side of the blanket’ and is supported by the 1929 quote from the American author Thorne Smith which states: “In most commuting towns…there are always two sides of which tracks serve as a demarcation. There is the right side and the wrong side. Translated into terms of modern American idealism, this means the rich side and the side that hopes to be rich.”
Examples
Sarah: My Dad won’t let me hangout with my friends from the other side of London. Tom: What? Why not?
Sarah: He claims they’re from ‘the wrong side of the tracks’ and thinks I might get myself into trouble by spending time with them!!!

Company CEO: After growing up in a working class family ‘on the wrong side of the tracks’, I feel very proud to be where I am today.

James: Be careful which route you take home, you don’t want to end up ‘on the wrong side of the tracks’
Anne: What do you mean?
James: You know, the rough side of town!
人気記事
StartNEXTPREVEnd