English & Cycling in and around London

Use your favourite hobby to discover London

Improve your Business English or General English & then discover England on your bicycle on historic world famous cycle routes. We have various packages available to suit varied budgets.

All cycling sessions include a native English speaking, cycling English tutor. CONTACT US TO DISCUSS YOUR Cycling NEEDS, DREAMS or WISHES.

Nine bike rides in and around London

Fancy whizzing past Zone 1 landmarks, cruising along canal paths or getting lost in greenery? It’s time to hop on your bike for one of these London cycle routes.

London has some pretty brilliant public transport options: iconic double deckers, tubes that run all through the night, buses that are also boats. We’ve even got a cable car. But sometimes it’s worth opting for some fresh(-ish) air and a thigh workout instead. Whether you’re taking your trusty road bike out for a spin or picking up pay-as-you-go wheels, here’s our pick of great, scenic and central cycle routes in London. Ready, steady, ride! 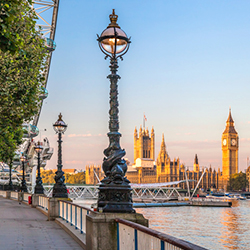 Take a spin along the Thames and spot the who’s who of London’s riverside landmarks along the National Cycle Network’s Route 4. Packed full of highlights – the London Eye, the Globe, Tate Modern – the journey combines quieter roads with traffic-free paths, letting you sightsee to your heart’s content. If you’re eyeing this up as a potential date, take it at a leisurely pace and stop off at Borough Market, where you can pretend to know about the provenance of all that posh meat and cheese on offer. Or, if things get competitive, race to the end – first to the steps of The Royal Observatory wins.

Highlights: How jealous all your friends will be of your Instagram story. 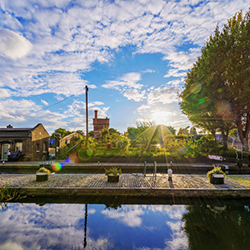 This not-so-loved stretch of Regent’s Canal – which means less people to dodge on the towpath – takes in three of east London’s parks. At Limehouse, jump on the Thames Path towards Islington, passing a vibrant canal community and a few locks along the way. You’ll soon come to the narrow green strip of Mile End Park. Back on the canal, head northwards to skim the edge of Victoria Park (stopping at the legendary Pavilion Cafe for a Victoria sponge), then follow the signs up to Broadway Market. If it’s a Saturday, the market will be in full swing, so jump off your bike to tackle the tourists as you head up this busy thoroughfare into London Fields.

Highlights: Ending your ride with a refreshing dip in London Fields Lido – not the canal. 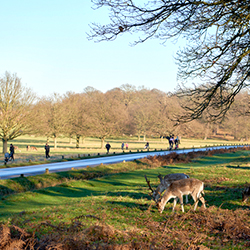 Take a right-of-passage risk with a brisk loop around one of London’s favourite cycling spots. Starting on Cycle Superhighway 8 from Westminster to Wandsworth, you’ll wind your way down the Thames and past Tate Britain and Battersea Power Station before joining up with the hustle and bustle of the South Circular. From here, merge with the peloton of Lycra-clad bikers down to the park and its 7.5 mile circuit. The clockwise route will have you huffing and puffing up the sharp climb of Broomfield Hill, while you’ll have the slightly flatter-but-longer Dark Hill to contend with if you opt for the anti-clockwise loop. Stop for a well-earned pitstop at one of the cafés when you’re done before retracing your route back into central London.

Highlights: Being able to drop that you’ve ‘done’ Richmond into conversations with the cycling commuters in your office. 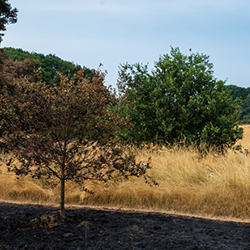 The beauty of this ride is in the bookends (the less said about the bit between the destinations, the better). First, start off in the mighty Olympic Village. Cruise around the car-free tarmac, taking in the iconic Aquatics Centre, Olympic Stadium and that wiggly Orbit thing. Head up to the VeloPark for a peek at the pros, then turn eastwards into Stratford. Any route will do, but aim for Cann Hall Road, which leads into a beautiful clearing of Wanstead Flats. Strikingly different from all the Olympic shininess, this huge expanse of rural greenery makes for a lovely contrast. Pick a trail and go get lost in the wilderness.

Highlights: Parking up for a lakeside ice cream in Wanstead Flats. Just watch out for the sassy geese. 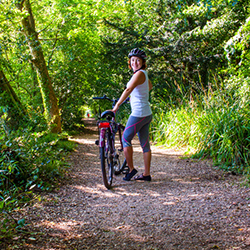 Leave London behind (in your mind) and embrace nature on the route connecting two of north London’s most loved parks. Starting in Finsbury Park, the flat path winds its way along the Parkland Walk – a tree-lined track of an old disused railway. The only obstacles to dodge are the odd yummy mummy out for a stroll with Tarquin and Tabitha. A small section of riding on the road connects the two sections between Highgate and Muswell Hill, with the second path leading you up to Alexandra Palace and its spectacular views. Spot London landmarks on a clear day, have a go in a swan-shaped pedalo on the boating lake, or head back to Finsbury Park from the train station after whizzing down the other side of the hill.

Highlights: The hilltop view from Alexandra Palace, without the climb that usually comes with it. 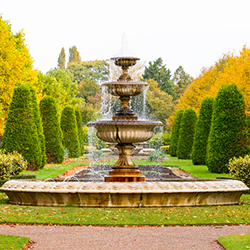 More of a loop than a route, the parameter of Regent’s Park is a great part of London to practice race intervals and pick up some speed. Obviously be careful, but there’s hardly any traffic lights to worry about and some parts are car-free, so you can zoom around as many laps as your Sunday hangover can handle. Start in the far corner just up from Regent’s Park tube station and head anti-clockwise around the park. The immaculately-kept flowerbeds and wide open space make this one of London’s prettiest parks to whizz around, and don’t forget to check out the serious property porn standing on the sidelines.

Highlights: Trying to spot giraffes as they pop their heads out of ZSL London Zoo. 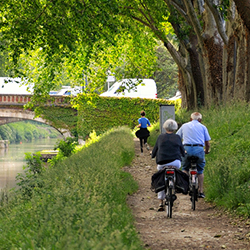 Total distance: 10km
Difficulty: Easy – a mainly flat route along one of the capital’s hidden gems

Bookended by short stints on quiet roads, this route will take you from the home of Platform 9¾ to Portobello Market in no time at all. After joining the Regent’s Canal Towpath at Granary Square you’re pretty much plain sailing until you reach west London’s iconic Trellick Tower. Dodge the tourists in Camden Lock, spot some of the wildlife on display at the zoo in Regent’s Park, and take a break in one of the waterside cafés and pubs of Little Venice. Turn off the path at the brutalist beacon and weave your way down the quiet side streets into the heart of Notting Hill.

Highlights: Waving to the narrowboat residents on the canal, safe in the knowledge that you won’t have to deal with emptying your toilet later. 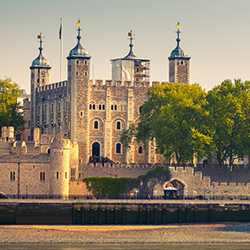 The Tower of London to Big Ben

Definitely one of the most sightseeing-packed routes in the world, this riverside ride takes in more of the capital’s icons than you can shake a ‘I love London’ snow globe at. It also follows one big cycle lane, so you can have a tourist’s day out in relative safety. Poke around the Tower of London then hop onto Lower Thames Street, passing the Monument on your right and The Shard, Shakespeare’s Globe and Tate Modern over the river to your left. Zoom up to Somerset House, before continuing along Victoria Embankment with water edge views of the London Eye and the South Bank on the other side. Before you know it, Big Ben will appear in front of the Palaces of Westminster for a grand sightseeing finale – just remember to keep your eyes on the road too.

Highlights: Ticking off so many of London’s big icons, without being sat on a stuffy tourist bus. 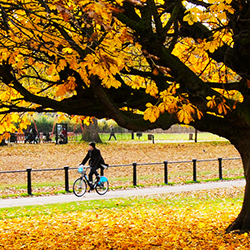 Fun fact: nine of the top 10 journeys made on Boris bikes start and end in Hyde Park. And with the traffic-free lanes of royal park to frolic around in, it’s easy to see why. Grab yourself a bike from the entrance nearest to Marble Arch and set off on an anti-clockwise (or clockwise, we’re not fussy) loop of the park. Spin your way through the Italian gardens, give Wills, Kate and the kids a wave as you pootle past Kensington Palace and stop for a breather to admire the Royal Albert Hall and the Albert Memorial it faces. If you want to delve into the park a bit deeper, turn onto West Carriage Drive for views across the Serpentine and the Princess Diana Memorial Fountain. But if you like your royals with a slice of revolution, then power on down to Park Lane and to complete the lap.