A Bird in the Hand is Worth Two in the Bush: Origin and Meaning

Meaning
This idiom advises us that it’s better to have one small thing for certain and keep hold of it than to risk losing it by trying to get something more or something which we think might be better but which we are not certain we can obtain. Thus, it advises against taking risks when we already have enough as we could end up with less than we started with.
Origin 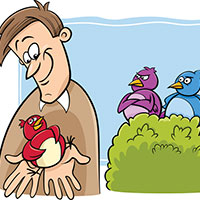 This idiom first appeared in English in 1530 in a book entitled ‘The Boke of Nurture or Schoole of Good Maners’ by Hugh Rhodes in which he notes: ‘A byrd in hand – is worth ten flye at large.’ It is also included in John Heywood’s glossary ‘A dialogue conteinyng the nomber in effect of all the prouerbes in the englishe tongue’ from 1546. Here it appears closer to the current form as ‘Better one byrde in hande than ten in the wood.’ However, the potential origins of the idiom are thought to be much older. In the Near Eastern Aramaic Story of Ahikar from the 7th Century there is a sentence which, in modern day translations, appears as ‘Better is a sparrow held tight in the hand than a thousand birds flying about in the air’, almost exactly the same as the form used by Rhodes in 1530. There is also evidence of the idiom in 13th Century Latin, ‘Plus valet in manibus avis unica quam dupla silvis “, which, like Heywood, uses ‘in the woods’, rather than ‘in the bush’.
Examples
Sarah: I don’t know whether to buy this dress now or wait until the sales when it might be cheaper.
Laura: Oh, that’s risky. I would buy it now; a bird in the hand is worth two in the bush!

James: I’ve been offered the job at Pret A Manger but I’m waiting to hear back from the National Gallery about the job I applied for there and that’s the one I really want! I don’t know what to do…!
Sam: Well, that’s easy! Just tell the manager at Pret A Manger that you’ll let them know in a few days and wait and see if you hear from the National Gallery.
James: That would be the perfect solution but I have to say whether I accept the job at Pret or not today otherwise they’ll give it to someone else!
Sam: Oh, well that makes it tricky!
James: I know and my Grandma always says ‘A bird in the hand is worth two in the bush’ so maybe I should just take the one I’m sure I have…
Sam: Yeah, you should always listen to your Grandma!

Man: You can take this £20 now or you can gamble again to potentially double your money.
Woman: I’ll gamble again! I’ve never believed in that ‘A bird in the hand is worth two in the bush’!! Take the risk!
StartNEXTPREVEnd