Can’t See the Wood for the Trees: Origin and Meaning

Meaning
If someone ‘can’t see the wood for the trees’ (or in American English, ‘Can’t see the forest for the trees’) it means that they are so involved and concerned with all the small details (the trees) of a situation that they are unable to get a clear overview of the whole situation (the wood) and so often lose perspective and miss the most important point.
Origin 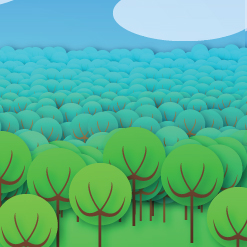 Many dictionaries claim that the first evidence of this idiom can be found in a book of English proverbs called ‘A dialogue conteinyng the nomber in effect of all the prouerbes in the englishe tongue’, which was written by the English author, John Heywood in 1546. In the book he writes:

‘An olde saied sawe, itche and ease, can no man please. Plentie is no deyntie [dainty]. Ye see not your owne ease. I see, ye can not see the wood for trees.’

However, the fact that it was recorded in this book means that it must have already been in common use prior to 1546.

This is proven by the appearance of the idiom in a book, believed to be from 1533, written by a man called Thomas More. The book has a very long title (almost 4 lines long!), so it is more simply known as, ‘The Confutation of Tyndale’s Answer”. Thomas More uses the idiom when, after referring to a man who can see all the parts of a woman but not the woman as a whole, he states:

Interestingly, but perhaps not surprisingly, given the fact that trees played such an important role in the culture of so many European cultures, this idiom is almost exactly the same in a number of other European languages!
Examples
James: ‘The fact that my fiancée is worrying about the sequins on her bridesmaid dresses when we’re trying to plan a whole wedding makes me think that she can’t see the wood for the trees.’

James: I’m so overwhelmed at work; I’ve got so much to do… Reports to check, reviews to write…I don’t know where to start!!!
Sarah: Why don’t you write a list to see what is most important to do first; sometimes a list can be really helpful when you can’t see the wood from the trees!

Sarah: I’ve just bought a new English grammar book but it’s awful – I can’t see the wood for the trees!
James: What do you mean?
Sarah: Well, the explanations are all so long and detailed and the examples are so complicated that you lose the main point!
人気記事
StartNEXTPREVEnd