Pound of Flesh: Origin and Meaning

Meaning
Something which is owed that is required to be paid back; a lawful but unnecessary repayment.
Origin 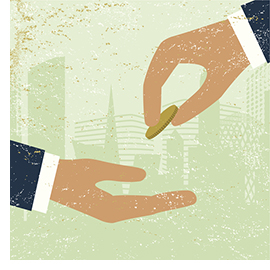 The idiom derives from Shakespeare’s ‘Merchant of Venice.’ In the play, Bassanio asks his merchant friend Antonio for a loan, so that he can pursue a wealthy Portia. As he cannot afford the loan, Antonio suggest Bassanio borrow the money on the security of approaching shipments. Bassanio decides to approach Shylock, a Jewish moneylender (a practice very common at the time). Shylock agrees, yet instead of charging interest, he asks for a pound of Antonio’s flesh if the loan isn’t repaid within three months. In this he is able to express his hatred of antisemitism, widespread at the time. Shylock’s speech contains some of the most vocal condemnation of racism in world literature:

Later in the play, when Antonio’s shipments are lost at sea, Shylock has him arrested and taken before the Duke. There he demands his ‘pound of flesh,’ a repayment which will inevitably result in the debtor’s painful death. The Duke, presiding over the court, seeks legal advice from the lawyer “Balthazar,” who is Portia in disguise. Portia pleads for Shylock to have mercy on Antonio. Her speech also contains some of the most memorable lines in Shakespeare. In contrast to the ‘pound of flesh,’ it is a heartfelt plea for forgiveness:

The quality of mercy is not strained;
It droppeth as the gentle rain from heaven
Upon the place beneath. It is twice blest;
It blesseth him that gives and him that takes:
‘T is mightiest in the mightiest; it becomes
The throned monarch better than his crown:
His sceptre shows the force of temporal power,
The attribute to awe and majesty,
Wherein doth sit the dread and fear of kings;
But mercy is above this sceptred sway;
It is enthronèd in the hearts of kings,
It is an attribute to God himself;
And earthly power doth then show likest God’s
When mercy seasons justice.

In the end Antonio’s death is only prevented as Balthazar explains the bond is for flesh but not for a single drop of blood. So Shylock cannot collect the pound of flesh.
Like so many phrases coined by Shakespeare, this idiom is still widely used today:

Examples
1. Banks are quick to demand their pound of flesh from the small businessman who goes even slightly into debt.

2. He wants revenge. He won’t be satisfied until he takes his pound of flesh.

3. I didn’t realize working here was going to be such hard work. They really demand their pound of flesh, don’t they?
StartNEXTPREVEnd