Take a Trip Down Memory Lane: Origin and Meaning

Meaning
Remember happy times from the past with nostalgia.
Origin 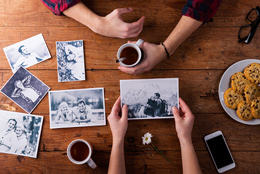 Although this idiom may have originated in the 19th century, where it can be found in literature as early as 1883, it is believed it became popular with a song from 1924 called ‘Memory lane’ written by Bud de Sylva. It was also later used in a 1994 film: In Society with Abbot and Costello. This idiom was even used by a former American President (Ronald Reagan) in one of his speeches.

Like many idioms it is sometimes difficult to pinpoint where exactly they come from but there are many ideas if we are willing to look for them.

A very popular idiomatic expression that was used in the past, is very much in use nowadays and will probably continue to be used in the future.
Examples
– I took a trip down memory lane to see my grandparents’ house.

– Going round my old school was a stroll down memory lane.

– We took a nice trip down memory lane while enjoying a cup of coffee.
人気記事
StartNEXTPREVEnd