Storm in a Teacup: Origin and Meaning

Meaning
A lot of fuss that is being made about something that is not important.
Origin 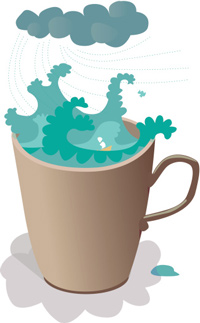 A storm in a teacup is the British equivalent to the US expression a tempest in a teapot, and the earliest variation of this idiom dates back to 52 BC when Cicero wrote:

This expression has been modified through time, but the current meaning of a storm in a teacup actually can be traced back to Lord Chancellor Thurlow who referred to an uprising on the Isle of Man as a storm in a teacup, i.e. a battle that has been exaggerated, blown out of all proportion and nothing really to worry about.

Since then this idiom has maintained the same meaning and similar versions of this idiom can be found in numerous languages today:

Examples
– I saw my neighbours Sue and Jane arguing outside, but it ended up being a storm in a teacup.

– The NASDAQ index has just fallen by 0.5%. If you ask me, we just have to ride it out as I think it’s just a storm in a teacup.

– What’s going on? Why is the news reporting on such trivial stuff? Don’t worry; it’s just a storm in a teacup. We’ll get to the bottom of what the government is trying to hide soon enough.
StartNEXTPREVEnd