Meaning
Doing or saying something to show that you want to end a quarrel or argument.
Origin 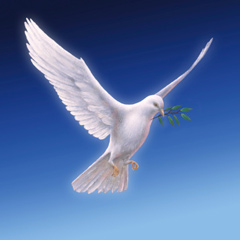 As with many “Western idioms”, this idiom comes directly from the Bible and relates to the well-known story of Noah’s Ark. God had created humanity, but humanity rebelled against God. This rebellion was so fierce that God decided to send a flood to appease the rebellion. In order to survive the flood, Noah built an Ark and filled it with many species of animals to save. After spending 250 days on the Ark, and noticing that the waters were receding, he sends a raven and a dove to see if they can find dry land, but they return empty handed. Undeterred, he decides to try again for the last time, and sends the dove off once more, but this time, to his delight, the dove brings back an olive branch.

The olive is an ancient symbol meaning “let us make peace” and the willingness to bring conflict to a conclusion. If you extend an olive branch, therefore, means that you want to make peace with someone after an argument, fight or disagreement. So it is easy to see why it was so significant in Noah’s story.
Examples
– Whenever I have an argument with my sister it’s always me who has to extend the olive branch.

– The Prime Minister extended the olive branch to the opposition.

– The strike ended with management extending an olive branch by increasing the pay by 20%, not 40%.
StartNEXTPREVEnd