Be in the Doghouse: Origin and Meaning

Meaning
Slang to indicate that somebody is in trouble because they did something naughty or something they weren’t supposed to.
Origin 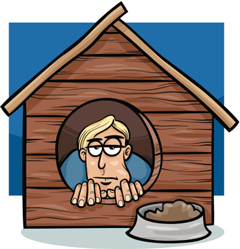 Being in the doghouse derives from a type of accommodation which was found on boats and trains. Both modes of transport involved workers having to sleep in dormitory-like accommodation and if there wasn’t enough space they would have to create some by building some kennel style huts, which were called dog houses.

There is, however, a more interesting derivation which relates to Peter Pan. In the original book, Mr Darling got very upset when he realised that he might have been responsible for his children being kidnapped and, as a sign of remorse, he segregated himself to the family dog’s house (Chapter 16 of Peter Pan, 1911, J. M. Barrie).

Although this is the most romanticised version, it is also the least accurate as dogs most certainly did not sleep in kennels in British households in those days, but probably on comfortable lounge chairs.

Examples
– Don’t go to a party empty-handed, otherwise you’ll be in the doghouse.

– I’m really in the doghouse with my boss. I was supposed to send that letter off and I completely forgot.

– I’m so annoyed! My husband came home drunk last night. Oh boy, is he in the doghouse now!
StartNEXTPREVEnd