One Man’s Meat is Another Man’s Poison: Origin and Meaning

Meaning
Something that one person really likes can be greatly disliked by another person – different people can have very different tastes. This phrase is often used to explain that people can disagree strongly on what is good or bad, right or wrong. Sometimes this idiom is shortened to the phrase “one man’s meat…”
Origin 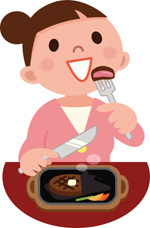 In this phrase “meat” has the general meaning of “food” – something that you enjoy and is good for you, while its opposite – “poison” – means something that is extremely bad for you and therefore people dislike. This saying was originally used by the Latin writer Lucretius in the 1st Century BC. His statement “quod ali cibus est aliis fuat acre venenum” translates as “what is food for one man may be bitter poison to others”. It was referred to in English in 1604 by the playwright Thomas Middleton, who modified it to “one mans meate, is another mans poyson” (one man’s meat is another man’s poison). Today the phrase is still used to underline that people do not all share the same preferences. A more modern idiom which expresses a similar idea is “one man’s trash is another man’s treasure”.
Examples
Kylie: “What do you mean you don’t like chocolate? How can anyone not like chocolate? It’s delicious!”
Pete: “Well, I know that many people adore chocolate, but I find it much too sweet and rich. I guess it’s true that one man’s meat is another man’s poison.”

Bob: “I would absolutely hate to be an actor – I’m extremely shy and I hate being the centre of attention. However, it really is the case that one man’s meat is another man’s poison, because my sister Judy dreams of being a theatre actress – she finds being watched by an audience exhilarating.”

Greg: “I have no idea how anyone can listen to heavy metal music and actually enjoy it. To me it sounds awful.”
Rosie: “Well, one man’s meat…”