Meaning
To be discovered in the middle of doing something wrong or committing a crime (e.g. cheating or stealing).
Origin 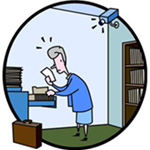 This idiom originated in Scotland in the 15th century. At that time, it was very common for thieves to steal and kill other peoples’ livestock (animals) but it was difficult to prove unless the thief was actually caught with the animal or with blood of the dead animal on his hands. In this case, he would literally be ‘caught red-handed’. The phrase has now been expanded to refer to any crime or wrongdoing.
Context
“I was trying to steal the private documents from the office for you but I was caught red-handed. I didn’t realise there was a CCTV camera in the room!”

“Did you hear what happened to Greg last week? He was fired from his job after he was caught red-handed stealing money from the till!”

Teacher: “Jeremy! Are you cheating in your exam?”
Jeremy: “No, of course not. I… I… was just looking for my pencil.”
Teacher: “Don’t lie Jeremy, I caught you red-handed copying from Sue’s exam. And look, your answers are all exactly the same as hers!”
人気記事
StartNEXTPREVEnd