Apple of My Eye: Origin and Meaning

Meaning
Something or someone cherished and loved above all others.
Origin 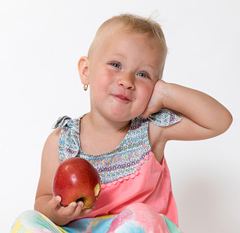 The first recorded examples of this expression were:

The literal meaning of apple of my eye derives from the fact that in the past there was no word to describe the pupil of the eye. In those days, they thought that the pupil was a solid round object which they referred to as an apple, as it was the most common solid round object at the time.

Eyesight was considered to be something very precious that needed looking after. If someone was ‘the apple of someone’s eye’ it meant that they were similarly precious and important. In other words, it was used as a term of endearment to show someone you really loved or cared for them. The expression has retained this meaning over time and is most often muttered by mothers to their children.

Examples
– Susan has three children, but the youngest is the apple of her eye.

– Jack is as cute as a button, and is the apple of his teacher’s eye.

– Peter and Caroline have two cats, but the ginger one is the apple of her eye.
人気記事
StartNEXTPREVEnd