Don’t Count Your Chickens Before They Hatch: Origin and Meaning

Meaning
You shouldn’t assume that something will definitely happen before it really does. Don’t make plans based on predicted results that haven’t occurred yet. This phrase is often shortened to Don’t count your chickens.
Origin 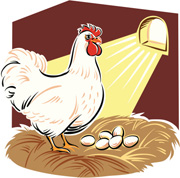 A hen (female chicken) lays eggs from which young chickens (chicks) “hatch” or emerge. However, not all eggs successfully produce a chicken, so you shouldn’t count the eggs and assume that each one will produce a chick – you should wait to count the actual chickens until they have hatched.

This phrase may have its origins with Aesop, the Greek fable writer who lived around 620 to 560 BC. In his fable “The Milkmaid and Her Pail”, a milkmaid carries a pail (bucket) of milk on her head and daydreams about selling the milk, buying chickens with the money and then becoming so rich from selling the eggs that she becomes independent. She will then have enough money to shake her head to say no to all the young men trying to win her love. However, in the fable she is so immersed in this daydream that she shakes her head and accidentally drops the milk, therefore destroying the possibility of her dream by imagining it too soon. There is a line from the fable which reads “Ah, my child,” said the mother, “Do not count your chickens before they are hatched.”
Examples
Mary:“I’m sure my boss will give me a raise next month, so I’ve decided to treat myself to an exotic holiday.”
Dennis:“If I were you I wouldn’t book the holiday until you actually get the raise…don’t count your chickens…”

The current Prime Minister seems pretty confident that his party will win the general election in May and get re-elected. However, he shouldn’t count his chickens until they hatch.

Harry: “When Liverpool wins the FA Cup, I’m going to have a huge party!”
Beth:“Don’t count your chickens before they hatch! They haven’t even played the semi-finals yet!”
StartNEXTPREVEnd