Meaning
An idealised chivalrous man who comes to the rescue of a woman in a difficult situation.
Origin 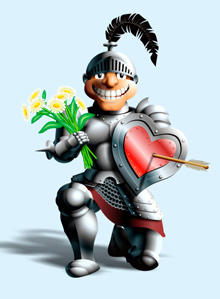 A Knight in shining armour dates back to Victorian times, when stories and legends of heroic fighters in shiny armours battled against the forces of evil for the greater good, saving damsels in distress along the way. They were popular tales that were handed down from generation to generation, and the inspiration behind famous stories such as King Arthur and the Knights of the Round Table, the Three Musketeers, and more recently Game of Thrones, even though the ones depicted here were of a less chivalrous nature (see Jamie Lannister, for instance).

This idyllic view of knights has persisted throughout history, but the image of helpless pasty-faced buxom women captured by an evil being, only to be rescued by a dragon-slaying, sword-brandishing handsome knight has fortunately long gone, and as a result, the expression has become gender neutral. Who would want to be saved by a horse-smelling, sweat-reeking knight anyway, says the feminist in me?

Examples
– The firefighters who rescued us were our knights in shining armour.

– Caroline is still waiting for her knight in shining armour to turn up. It will be a long wait.

– Bill got stuck in the lift and waited for his knight in shining armour to come and save him.
StartNEXTPREVEnd