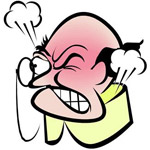 This idiom originated in the 1600s’ but it is not known exactly where or how it was created. It is thought that years ago, scientists believed that blood actually boiled in people’s bodies when they became angry or excited. However, many people think that it started being used because when you get extremely angry, you often feel hot and your skin becomes red – in fact, sometimes you even feel like your blood is actually going to ‘boil’!
Examples
“It made my blood boil when I saw how she spoke to her children – she was so rude!”

Tom: “Where have you been? I’ve been waiting for you for an hour and a half!”
Sue: “Oh you know me, I’m always late.”
Tom: “Grrrr you really make my blood boil when you arrive late and you don’t even apologise!”

“Jenny has to work seven days a week to earn enough money so it makes her blood boil when she hears people complaining that they’re tired.”