A Dark Horse: Origin and Meaning

Meaning
Someone who surprises you by doing something out of character, or someone who becomes popular despite being previously little known.
Origin 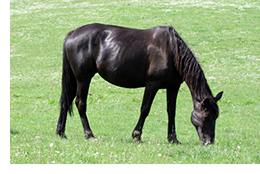 This idiom was originally horse racing term. A dark horse was one that wasn’t known to the gamblers and was difficult to place a bet on.

The metaphorical use later spread to other areas.

Benjamin Disraeli provides the earliest known reference to the phrase in The Young Duke, 1831:

“A dark horse, which had never been thought of … rushed past the grand stand in sweeping triumph.”

The metaphorical use seems to have been first used in the academic world:

Sketches from Cambridge, 1865 – “Every now and then a dark horse is heard of, who is supposed to have done wonders at some obscure small college.”
Examples
– I didn’t know Linda had written a novel. She’s a bit of a dark horse, isn’t she?

– 17-year old Karen Pickering could also be a dark horse for a medal in the 400 metres event.

– I can’t say which team will win – there are two or three dark horses in the tournament.
StartNEXTPREVEnd