Rub Somebody the Wrong Way: Origin and Meaning

Meaning
To annoy, bother or irritate someone.
Origin 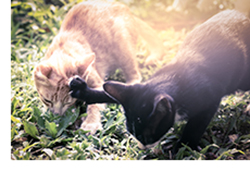 ‘Rub somebody the wrong way’ might derive from when you stroke a cat in the wrong direction (from its back toward the head). As you know, when you stroke a cat, they like to be stroked or petted from head to tail, rather than in the opposition direction.
Early appearances of this idiom include one from a book called Aunt Mary’s Tales, published in 1819:

“Very probably,” said Henry, smiling at poor Charles’s credulity, “for nothing is more likely to resemble a cat than one of its own species; and I know, that when a cat’s back is rubbed the wrong way, sparks, which are electric sparks, may be seen in the dark.”


Another possible explanation refers to the cleaning method of servants in the homes of well-to-do (rich) families’ homes. If a maid cleaned the wood floor the wrong way, it would leave streaks in the floor, and the lady of the house would be annoyed or upset by this. Thus she was “rubbed the wrong way.”
Examples
My younger sister rubs me the wrong way. I find her so annoying!

A: How is your new roommate?
B: He keeps rubbing me the wrong way.
A: Why? What is he doing?
B: He’s always having parties, being messy, eating my food!

There’s nothing really wrong with her, she just rubbed me the wrong way when we first met.
人気記事
StartNEXTPREVEnd