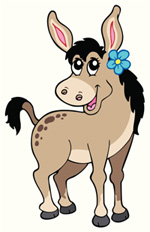 The original version of “donkey’s years” was probably “donkey’s ears” – as the ears of a donkey are particularly long. In rhyming slang “donkey’s ears” rhymes with “years”, therefore by simply saying “I haven’t seen my cousin Jim in donkeys”, the listener would understand that you hadn’t seen your cousin in many years. A reference to this in early 20th century literature is from E.V. Lucas’ 1916 “Vermillion Box”: “Now for my first bath for what men call “Donkey’s ears”, meaning years and years.” Today “donkey’s ears” is more commonly “donkey’s years” and this makes sense as donkeys can actually live for many years. In fact, Lively Laddie, one of the donkeys giving rides to customers on Blackpool Pleasure Beach, lived until the age of 62 years old, and the record for the longest-living donkey is 70 years.
Examples
Corinne: “I’m going to visit Brighton next weekend, would you like to come?”
Dennis: “Oh wow, I’d love to come. I can’t remember the last time I was in Brighton; it must be donkey’s years!”

Phillip: “Excuse me, are you by any chance Johnny Field? I think we might have been at school together many years ago!”
Johnny: “I certainly am…and you must be Phillip Walker – you look just the same! What a blast from the past…I haven’t seen you in donkey’s years!”

Tour guide: “During the 19th and 20th centuries, this area of North Wales was famous for its coal mines. For donkey’s years, coal mining was the main industry in this region, but in the 1980s a lot of the pits were closed.”