Over the Moon: Origin and Meaning

Meaning
To be delighted or extraordinarily happy, usually due to a wonderful piece of news or success.
Origin 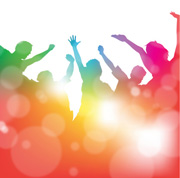 Many British children would recognise this idiom from a nursery rhyme (children’s poem) called Hey Diddle Diddle, which was published around 1760 in a collection known as Mother Goose’s Melody. The poem refers to a cow which had so much fun that it “jumped over the moon”:

Hey diddle diddle,
The Cat and the Fiddle,
The Cow jumped over the Moon,
The little dog laughed to see such fun,
And the Dish ran away with the Spoon.

During the 20th Century, over the moon was noted as being a common expression uttered by footballer managers in interview if their team won. In the late 1970s, a humorous magazine, Private Eye, began publishing the quotations given by English football managers after a match; most often if a manager was happy with the result, he would say that he was over the moon, whereas if his team had lost he would declare himself as sick as a parrot.
Examples
Alex: “How did you do in your exams? Did all your hard work pay off?”
Sarah: “I got four A grades, so I’ve been accepted by Cambridge University to study Law – I’m absolutely over the moon!”

“I felt completely over the moon when they called to offer me the job, In fact, as I got off the phone I quite literally jumped for joy!”

Interviewer: “You’ve been nominated for the category of Best Actress at the Oscars next month. How will you feel if you win?”
Actress: “Well obviously I would be over the moon, but the competition is extremely tough – I’m up against some amazingly talented people.”