Meaning
To show your real character or personality, especially when it is unpleasant.
Origin 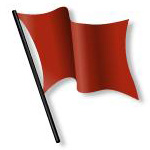 This idiom originates from the 1700s. When ships went into battle, they had to show their ‘colours’ (the flag of their country). Many ships would show a flag from a different country in order to trick their opponent into thinking they were an ally (friend). Then, when they were close, they would change the flag to their real flag (‘show their true colours’) and attack.
Examples
“I’ve known Sophie for years and she’s a really dishonest person but John seems to really like her. I wonder how long it will take until she shows her true colours.”

“I always liked Tim but when they promoted him to manager, he really showed his true colours. He fired two of my colleagues for no reason last month!”

Carol: “I heard you and Pete broke up. What happened?”
Sarah: “Yes, we did. Everything was great for the first few months but when we moved in together he started showing his true colours. He’s so lazy and selfish – I couldn’t stand it any longer!”
StartNEXTPREVEnd