To make an offer you can’t refuse 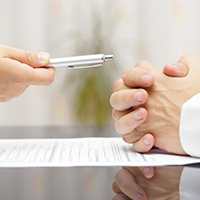 This idiom has two meanings. While this popular line is best known from ‘The Godfather’, written by Mario Puzo (1969), the phrase did exist before the book, for example it is used in the 1934 film Burn Em Up, but in this film the meaning is more of an attractive offer and less of a threat. Puzo changed the meaning into a threatening one, so that the Godfather could threaten people, while pretending his ‘offer’ was a kind one. Today, the idiom can be used for both meanings.
Examples

I was planning on attending Oxford until Cambridge offered me a full scholarship. It was an offer I couldn’t refuse!

The defendant claimed that he didn’t initially want to join the club, but they made him an offer he couldn’t refuse.

He didn’t want to sell his house, but the agent made him an offer he could not refuse.