To have a green thumb

Meaning
To be naturally skilled at gardening; to be able to help plants grow well.
Origin 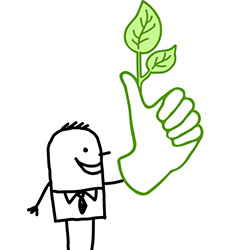 One theory is that this idiom came into being in the early 1900s and was thought to refer to the mud-stained fingers of gardeners. In particular, the algae which grew on the outside of earthenware plant pots would stain the gardeners’ fingers. While in the past it might have meant someone who enjoys gardening, today it is used to refer to someone who has a special skill at gardening.

Another theory is that it came about during the time of King Edward I. He liked green peas so much that he employed half a dozen serfs just to shell them during harvest time. The serf who shelled the most peas was declared to have the “greenest thumb” and won a prize.
Examples

Jack has a green thumb so his garden always looks beautiful.

You have such a green thumb! You must share your gardening secrets with me!

I don’t have a green thumb, so I need to take extra care when watering my house plants.