A plague on both your houses 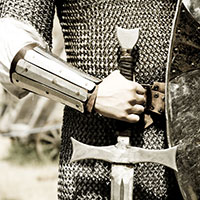 The idiom comes from Shakespeare’s popular play ‘Romeo and Juliet’ (1592). The ‘houses’ in the play were the Montague and Capulet families, who were at war with each other. Very simply, the curse, said by a character Mercutio as he was dying means: ‘I hope both your families get sick and suffer’.

Interestingly, the word ‘plague’ is similar to and sometimes confused with the word ‘plaque’. As you go around London, there are many blue ‘plaques’ on houses stating famous people who might have lived there – plaques on many houses!
Examples

I can’t decide which political party is worse, the Conservatives or the Liberals. As far as I am concerned, a plague on both their houses! I won’t be voting this year.

There are so many terrible fights in the Game of Thrones series between the Lannisters and Targaryens. It was like the writers had cast a plague on both their houses.

Why do you keep fighting? A plague on both your houses! I’m going to find a more peaceful solution!