Meaning
A slang term meaning, ‘to die’. It is a euphemism (a nicer/funnier way of saying something serious or tragic).
Origin 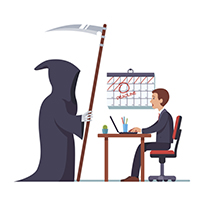 The idiom was established by 1785, where it appeared in Grose’s Dictionary of the Vulgar Tongue: “To kick the bucket, to die.”

One theory is that people would hang themselves by standing on a bucket, and tying a noose around their necks before kicking the bucket away. In 16th century England, a bucket wasn’t just a bucket as we know it today – Peter Levins’s Manipulus vocabulorum. A dictionarie of English and Latine words (1570), describes it as “a Bucket, beame, tollo”. The word “bucket” then also meant a “beam” or a “yoke” used to carry items.

However, the word “bucket” might also have entered English from the French word trébuchet, meaning “balance” or buque meaning “yoke”. It was later used by Shakespeare who in his play Henry IV (1597) wrote: “Swifter then he that gibbets on the Brewers Bucket” (To “gibbet” meant to hang). Another meaning could stem from “bucket” referring to the yoke that was used to hold pigs and other animals before they were slaughtered, particularly used in parts of Norfolk. The animals would struggle before they would “kick the bucket”.
Examples

Jane simply does not have a green thumb. Her plants always kick the bucket within a week or two.

I hope they invent a way to travel through time before I kick the bucket! I would love to see how people lived in the 16th century!

I should take better care of my health, I’m much too young to kick the bucket.