Have no truck with

Meaning
To reject or have nothing to do with
Origin 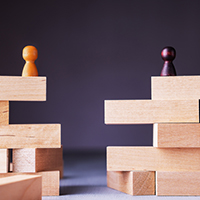 The word ‘truck’ comes from the French word ‘troque’, which meant ‘an exchange or a barter’. ‘Troque’ then entered the English language around the 11th century as ‘truke’. The Vintner’s Company Charter (1364) speaks of a transaction for some wine which was to be done ‘by truke, or by exchange’.

From the 17th century onwards, the word ‘truck’ also came to include the meaning ‘communication’ or ‘association’, and so ‘to have truck with’ came to mean ‘to communicate with’. Later, in the 19th century, the phrase became negative, meaning ‘to have nothing to do with’ such as in the Journal of the Royal Asiatic Society (1834), where it states that, ‘an officer should have no truck with thieves’. This negative usage is still used today.
Examples

He is a liar and a thief and I have no truck with him.

Sally and I used to be friends in school, but I have had no truck with her since.