Bite Off More Than You Can Chew: Origin and Meaning 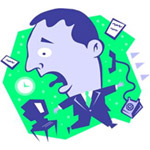 There are two possible origins of this idiom; however, we know that it started being used in America in the late 1800s. Some people believe that it originated at the time when many people chewed tobacco. When they were offered tobacco, some people would take a big “bite” of the tobacco – much bigger than they could chew! Others believe that the phrase was created by people watching children stuffing their mouths full of food and not being able to swallow!
Examples
“They offered me the job but the work was so difficult! I definitely bit off more than I could chew.”

“Don’t bite off more than you can chew – you have so many things to do at the moment, why don’t you ask someone else to organise the party?”

David: “Should we go to the cinema tonight?”
Emma: “I can’t tonight. I’m so tired, I just want to sleep.”
David: “Well, I’m not surprised – you’ve been biting off more than you can chew recently. I don’t understand why you offered to cook dinner for 30 people last night when you’ve been so busy at work this week!”