Hair of the Dog

Meaning
This idiom is one which many of us may have used over the Christmas season! It refers to a suggested hangover cure; namely, the act of drinking a small glass of whatever it was you were drinking the night before to help you feel better!
Origin 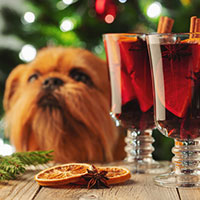 The original version of this idiom was ‘the hair of the dog that bit me’ and referred not to a cure for a hangover but rather a supposed cure for the life-threatening disease, rabies. Rabies is a disease which humans can get if they are bitten by a rabid dog (a dog that has rabies itself) and in medieval times people believed that it could be cured by putting the hair of the dog which had bitten the person onto the wound. Needless to say, this was never scientifically proven! Interestingly, though, unlike most idioms which have original literal meanings and later developed figurative meanings – usually after the literal meaning became obsolete, the figurative meaning of this idiom was in use before any recorded literal use.

The first record of the idiom is in 1546 in John Haywood’s text, ‘A dialogue conteinyng the nomber in effect of all the prouerbes in the Englishe tongue’. Here, he uses it most definitely in the figurative sense (relating to alcohol!) as he begs:

‘I pray thee let me and my fellow have A hair of the dog that bit us last night – And bitten were we both to the brain aright. We saw each other drunk in the good ale glass.’

In 1611 it was used once again in reference to drinking in Randle Cotgrave’s work, ‘A dictionarie of the French and English tongues’ in which he notes:

‘Our Ale-knights [habitual drinkers] often use this phrase, and say, Give us a haire of the dog that last bit us.’

Over a century later, in 1760, we find the first recorded literal use of the idiom in a work entitled ‘A Treatise on Canine Madness’ by Robert James. Advising on the treatment of rabies, James notes, ‘The hair of the dog that gave the wound is advised as an application to the part injured.’ However, James is unsurprisingly sceptical about said treatment, suggesting that the ashes of river crabs should be used instead – equally as promising!!

Understandably, with no scientific basis, neither of the above treatments is now considered effective for rabies. However, in relation to the figurative meaning, there is some scientific reasoning to the suggestion that a small amount of alcohol might help to relieve a hangover. This is because some of the symptoms of a hangover are actually a result of withdrawal from alcohol poisoning. Thus, a small ‘top up’ can help to alleviate this, even if, in the long run, it makes the hangover worse! Best stick to water!!
Examples
John: After that party last night I’m never drinking again, my head is banging!
Sarah: Really?! I’m going to have a beer with lunch!
John: Are you joking?
Sarah: No, it’s hair of the dog! The best cure!

Doctor: I think you’re simply suffering from the effects of too much alcohol!
Patient: Well, what do you recommend? Hair of the dog?
Doctor: Absolutely not; I suggest water, fresh air and no more drinking!

Customer: I’ll have a pint please
Barman: Hair of the dog is it?
Customer: Do I really look that bad?!