A Rolling Stone Gathers No Moss: Origin and Meaning

Meaning
Nowadays this idiom is interpreted in two ways, both of which see the ‘rolling stone’ as a person who moves from place to place a lot rather than settling in one location or, on a smaller scale, someone who cannot and does not commit to one career or lifestyle. The modern interpretation sees the moss as something negative: getting stuck in one place or having responsibilities and concerns. It suggests that people who move around a lot or who reinvent themselves regularly are able to avoid gathering these things and hence remain creative and fresh. The older interpretation meanwhile sees the moss as positive things all of which are required in life for a person to prosper – such as roots, relationships, knowledge and wealth. Thus it claims that you pay a price for not settling in one place as it prevents you from getting the things you need to succeed in life.
Origin 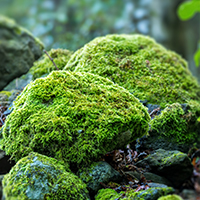 A version of the original saying with its positive interpretation of the moss appeared in many ancient languages including Greek and Latin and in 1530 Erasmus cited it in the third volume of his collection of Latin Proverbs entitled ‘Agadia’. The first English translation can be found in John Heywards work, ‘A dialogue conteinyng the nomber in effect of all the prouerbes in the Englishe tongue’ (1546) in which he presents it in a form almost identical to that of today: ‘The rollyng stone neuer gatherth mosse’. Following this, there is little evidence of when and why the negative interpretation of the idiom developed but it can certainly be seen as a more modern day viewpoint, which champions change and movement.
Examples
James: My parents keep telling me that I need to decide on one profession and stick to it but I like being able to try new things and reinvent myself whenever I want to!
Sarah: They’re probably just worried it won’t be good in the long run. You know what they say; a rolling stone gathers no moss.
James: What do you mean?
Sarah: Well, just that if you keep changing jobs, you’ll end up with no real roots or specialism and will probably make less money as a result!

Man: I don’t think I’ll ever settle in one place…
Woman: Why not?
Man: I just want to be carefree and footloose; a rolling stone gathers no moss you know!

Lucy: It must be hard to have to move around so much with your job, it must be really unsettling. A rolling stone gathers no moss…
Tim: Yeah, it’s difficult sometimes not having any real home or roots but it’s the price you pay!
Lucy: Yeah, I guess and you do get to see some amazing places.
人気記事
StartNEXTPREVEnd