Out of the Frying Pan and into the Fire: Origin and Meaning

Meaning
This idiom means quite simply that you move from one bad, stressful or dangerous situation to another even worse situation. This move from one to the other is usually a result of trying to avoid or escape the original situation.
Origin 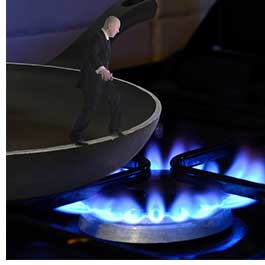 This idiom is thought to originally come from a Greek saying which talked about running from the smoke or fire and into the flame. It is in a poem by Germanicus Caesar that we can find the first recorded use of the original Greek version. In the poem Caesar tells the story of a hare who is being chased by a dog; the hare tries to escape by jumping into the sea but is then caught by a ‘sea-dog’ instead.

The later Latin version was developed as a sailor’s idiom appearing as, ‘’incidit in scyllam cupiens vitare charybdim’, meaning, ‘He runs on Scylla, wishing to avoid Charybdis’. According to Greek mythology, Scylla and Charybdis were mythical sea monsters, located on opposite sides of the Strait of Messina between Sicily and the Italian mainland. In reality the names referred to a dangerous rocky outcrop near to the Italian mainland and a whirlpool just off the coast of Sicily which were were seen as inescapable hazards for any sailor passing through the strait.

The next appearance of the phrase is in a fable by Abstemium, a 15th century Italian scholar who wrote fables based on those by Aesop. In his tale ‘De piscibus e sartigine in prunas desilentibus’ (The Fish and the Frying Pan), some fish are being cooked alive in a frying pan of hot oil. One of the fish persuades the others to jump out of the pan in order to save their lives, however, on doing so they land in the burning coals below the pan and thus suffer even greater pain. Abstemium concludes that the fable warns that ‘when we are avoiding present dangers, we should not fall into even worse peril.’

Some sources claim that the tale and thus the idiom was first adapted into English in 1692 by Roger L’Estrange, however, it seems that there was an earlier use in The Confutacyon of Tyndales Answere, where Thomas More employed the phrase during a pamphlet row with William Tyndale. During said row, More claimed that his rival Tyndale had ‘featly conuayed himself out of the frying panne fayre into the fyre’.

Examples
James: I thought my old job was stressful, but my new one is 10 times worse. It’s like going out of the frying pan and into the fire!

James: I’m thinking of moving house because I’m sick of sharing with people I don’t know.
Sarah: Where would you go?
James: My sister has said that I can move in with her and her boyfriend.
Sarah: But you don’t get on well with your sister.
James: I know but the rent is so cheap!
Sarah: Well, I think you’ll be heading straight out of the frying pan and into the fire!

Sarah: My friend’s just had a baby and she said it was like going out of the frying pan and into the fire.
James: What does she mean?
Sarah: Well she had an awful pregnancy as she was really ill and in a lot of pain…
James: And now…?
Sarah: Now she’s still feeling ill but she also has a baby to look after and can’t get any sleep, it’s gone from bad to worse!!
人気記事
StartNEXTPREVEnd