Chalk and Cheese: Origin and Meaning 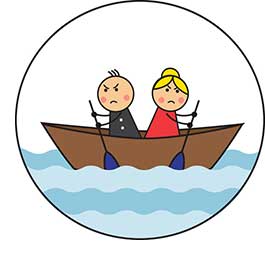 The first known usage of this phrase comes from John Gower in his Middle English text Confessio Amantis, 139. In this text an untrustworthy shopkeeper was selling chalk under the pretence that it was cheese: ‘Lo, how they feignen chalk for chese.’ ‘And thus ful ofte chalk for cheese he changeth with ful littel cost’ Frankly, British cheese in its untouched form can actually resemble chalk, so I understand how this trickster came up with this scam!
Chalk and Cheese’s popularity and longevity probably comes from its sound and alliteration*. Many phrases in English have prospered whilst others have failed due to the way saying the words actually sounds. Words that alliterate stick longer in the mind than some of those that don’t. Another interesting use of this phrase comes from the English countryside. In Salisbury in Wiltshire farmers that used to farm on the plains had to farm sheep due to the chalky consistency of the land. Whereas west of the town, the farm land was grassy with green pastures, the farmers there could farm cattle and make cheese.
When both sets of farmers attended Salisbury market they never mixed with each other, so local people started to say ‘they were like chalk and cheese.’

* alliteration= when words that start with the same sound (not just the same letter) are used repeatedly in a phrase or sentence.
Examples
My sister and I are like chalk and cheese.

Good luck getting those two to talk to each other — they’re like chalk and cheese.
StartNEXTPREVEnd