(It’s all) Swings and Roundabouts: Origin and Meaning

Meaning
a situation in which different actions or options result in no eventual gain or loss; much of a muchness.
Origin 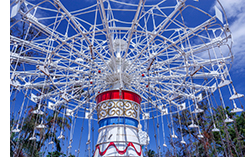 This expression derives from a poem by Patrick Chalmers called “Swings and roundabouts” first published in his volume Green Days and Blue Days in 1912. The poem tells the story of a travelling salesman and his erratic financial situation. Chalmers uses swings, children’s playground seats suspended by ropes or chains, on which children swing back and forth, as a metaphor for this poor man’s inconsistent earnings, and a roundabout to indicate that what comes around goes around (karma).
Examples
If you go to the cinema on Thursday you can get a discount, but if you go on Tuesday the bus is much cheaper. I guess it’s all swings and roundabouts.

You can have my room. It’s much bigger than yours but it doesn’t have an en suite…… Swing and roundabouts.

Come rain or shine, it’s all swings and roundabouts.