Meaning
Adjective to describe two people in a relationship who show a lot of affection towards each other in public through hugging and kissing.
Origin 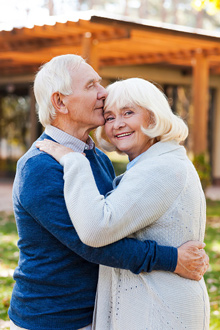 The origin of this idiom is not very clear but this binomial is formed by two rhyming words, love and dove to which a “y” has been added to make it sound cuter. The connection between the two words is not fortuitous, as a dove is not only the symbol of peace but also of love.

One of the earliest examples of lovey-dovey can be found in the 1819 book The Metropolis, and particularly in this quote towards the end of the book: “My dearest love-lovey, dovey, or odious duckey!”

Seeing old couples being lovey-dovey can be really heart-warming and endearing, but too much hugging and kissing on the Tube or in public spaces can be really annoying and cringeworthy so learn to measure your public displays of affection so as not to annoy or offend anyone.
Examples
– My grandparents are still all lovey-dovey. It’s lovely to see.

– There was a couple getting all lovey-dovey at the restaurant last night. It was really awkward and, to be honest, it kinda put me off my food.

– Rom coms are fun. I love watching couples get together and be all lovey-dovey. I’m such a romantic at heart.
StartNEXTPREVEnd