Have a Skeleton in the Closet: Origin and Meaning

Meaning
Have an incriminating and embarrassing secret from your past.
Origin 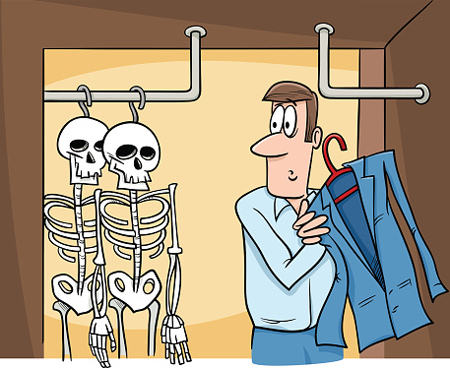 Having a skeleton in the closet dates back to the early 18th century when it was thought that shameful family secrets or diseases had to be kept quiet and hidden away.

But where does the idiom originate from?

The journalist William Hendry Stowell first used this expression in his article for the UK monthly periodical The Eclectic Review, 1816.

“Two great sources of distress are the danger of contagion and the apprehension of hereditary diseases. The dread of being the cause of misery to posterity has prevailed over men to conceal the skeleton in the closet…”

However, it is more generally believed that the idiom derives from the medical sphere. In the past, doctors weren’t allowed to perform autopsies on dead bodies until an Act of Parliament permitting them to do so was passed in 1832.

Before then, the bodies doctors were allowed to work on were those of deceased criminals who had recently been executed. If they were to dissect any other body, it had to be done in secret and the skeletons of these bodies were usually kept for research purposes. As nobody was supposed to know about them, they kept the skeletons hidden from plain sight, and what better place to hide them than a closet?

Since then the expression has been used to describe something to hide, a shameful or scandalous secret or something embarrassing that you don’t want anyone to find out.

Examples
– I don’t trust politicians. They have too many skeletons in their closet.

– I checked his profile online to see if he had any skeletons in his closet.

– Can I look behind that door, or do you have a skeleton in the closet?