A Penny for your Thoughts: Origin and Meaning

Meaning
A penny for your thoughts is a way of asking what someone is thinking.
Origin 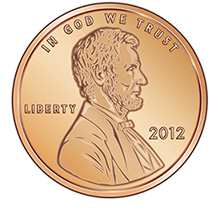 The word “penny” may have come from the English ruler Penda, King of Mencia (an Anglo-Saxton kingdom in today’s English midlands). During his reign from 626 AD to 655 AD, he issued coins that were called “pending.” To further this theory along, the old English word for penny is “penige.” In fact, the Danish still uses the word “Penge” for their money. Now, if you think that “penny” came from the Danish word (not the Danish coming from the English), then the word could have something to do with the pans that they used to use to coin the money.
As with most idioms or sayings, no one is exactly sure who first said “a penny for your thoughts” or when.

Examples
– They sat in silence for several minutes, when he finally looked at his friend and said, “a penny for your thoughts, Jenny.”

– Tom you look very happy today. A penny for your thought?
StartNEXTPREVEnd