The Elephant in the Room: Origin and Meaning 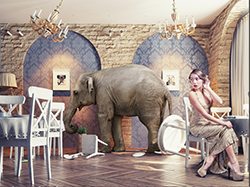 The exact origin of this idiom is unknown but there are some suggestions about how it may have come into use.

Wikipedia suggests that in 1814 Ivan Andreevich Krylove, a poet and fabulist, wrote a fable entitled “The Inquisitive Man” which tells a story of a man who goes to museum and notices all sorts of tiny things, but fails to notice an elephant.

In its current meaning it first appeared in an American newspaper. The meaning dates back to the1950s and the first reference to the phrase was found in a newspaper The Charleston Gazette – “Chicago, that’s an old Indian word meaning get that elephant out of your room.” The writer’s intention is unknown but it was nothing to do with elephants.