Meaning
A phrase said while knocking on wood to avoid bad luck.
Origin 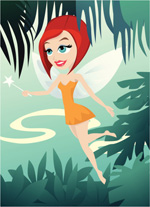 This superstition comes from the ancient pagan belief that fairies and spirits lived in trees and in wood. People might knock on wood the first time to ask for luck from the good spirits and to distract the bad spirits. They would then knock on wood a second time to say thank you. Later, the meaning changed for some Christians, who said that the wood represented the wood of the Cross. They believed that by knocking on it they were asking for the protection of God. Nowadays, the phrase is commonly used by people without a superstitious or religious meaning. People often say this phrase directly after expressing a hope, wish or positive prediction for the future.
Examples
“I’ll buy a car as soon as I pass my driving test, touch wood.”

“We’re going on holiday to Portugal in August, so the weather should be hot and sunny, touch wood.”

“When I pass my exams, touch wood, I’ll be able to get into my chosen university.”
StartNEXTPREVEnd