Meaning
To earn a living/earn enough money to live on and provide for yourself or your family.
Origin 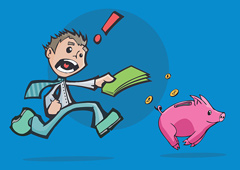 The idiom bringing home the bacon started in the 1100s in a small town in Essex. The legend goes that the vicar of the church of Dunmow would reward the couple that hadn’t argued for a whole year and a day with “a side of bacon”.

The winners were considered to be role models for the community and the competition was designed to create harmony in the family unit.

However, there are others who believe that the idiom started in the 1500s. In those days one of the most fascinating fairground attractions was to try and catch a greased pig with your bare hands, and whoever managed to do so would be able to take the prized animal home. So, if you won you would literally be bringing home the bacon.

But where does the connection to money come from? Well, if you consider that in both stories you had to earn your prize and that money was probably short at the time, it would be fair to say that the side of bacon represented a cash prize of sorts.