Finger in Every Pie: Origin and Meaning

Meaning
The full phrase is usually “To have a finger in every pie”. Someone who has a finger in every pie is involved in a lot of different activities or knows about a lot of different things. This idiom can be used positively, to show that someone is energetic and has varied skills and interests. However, in a different context, it can be used in a more critical way, to say that someone is too involved in activities that should not concern them.
Origin 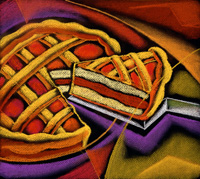 Often, when we see or smell a freshly baked cake or pie, the temptation is to taste it. This idiom probably originates with the idea that someone might sneak into the kitchen and stick their finger into a freshly baked pie in order to secretly taste it. If they are especially greedy, they might try to put a finger in every pie. The phrase was used by Shakespeare in his play Henry VIII, in which Cardinal Wolsey is described as being too involved in other people’s business:
“The devil speed him! No man’s pie is freed from this ambitious finger!”
Examples
Brad: “So if you’re a film producer, what does your role entail?”
Harvey: “Well. I have a finger in every pie…I have to make sure we stick to the budget, I organise the schedule and in the end I need to distribute the film to different cinemas.”

Wendy: “Planning this wedding is a complete nightmare – my fiancé’s mother wants to have a finger in every pie – she’s ordering the food, choosing the flowers and now she even wants to tell me what dress to wear!”
Gabby: Poor you! Don’t worry, after the wedding is over you’ll get some peace…at least your new mother-in-law won’t be able to come on the honeymoon!”
人気記事
StartNEXTPREVEnd