Out of the Blue: Origin and Meaning

Meaning
Something which happens suddenly, with no warning. If a bad situation suddenly develops, when everything seemed to be fine, we can say trouble came “out of the blue.” Equally, a good thing which arrives without warning could be described this way. A promotion or being fired from your job could come “out of the blue”, though the negative is probably more common.
Origin 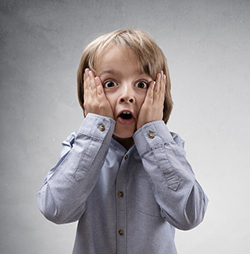 The full expression, though not often used, is “out of a clear blue sky”. Another older variation is the phrase “a bolt from the blue”, so the origin seems to be the idea of a thunderbolt, or lightening, coming when there were no clouds or rain in the sky.

The phrase is not actually that old, having only been written down in the 19th century, but sounds very formal and dignified as “a bolt out of the blue.” The shorter form is more informal, and quite common in speech.

Examples
– I was walking along, minding my own business, when out of the blue, a police car drove up, sirens going, and they started asking me questions about a robbery.
– The manager called me into her office, and out of the blue told me to clear out my desk, as I was fired!
– We’d gone out on a date, but when we finished the meal, he knelt down and out of the blue asked me to marry him!
StartNEXTPREVEnd