Cat Got Your Tongue: Origin and Meaning

Meaning
What to say to someone who is unable to speak due to guilt, fear or is simply lost for words.
Origin 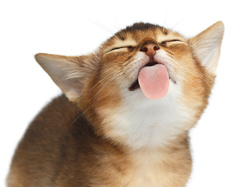 This very common English expression is thought to have many origins. Some people believe that it dates back to Egyptian times when the tongues of liars and blasphemers were cut out and given to cats for dinner. Others believe that it derives from a multi-rope whip called the “cat-o’-nine-tails”, used as a threat to maintain control on Royal Navy Ships.

However, the most interesting origin comes from the Middle Ages, when witches and warlocks were said to exist. The story goes that if you happened to encounter a witch, her black cat (often a symbol of witchcraft and evil) would steal your tongue, thus making you speechless and unable to share what you saw with anyone.

Whichever version you choose to believe, the origins are still up for debate, but nevertheless, this idiomatic expression has survived up until today and is considered to be one of the most used expressions in the English language.

Examples
Come on Joey, tell me who broke the lamp. What’s the matter, cat got your tongue?

I asked him whether I should break up with Michael, and he struggled to give me an honest answer. Cat must have got his tongue.

George Clooney: “I saw you with Matt Damon last night?”
Me: “Ummm… ugh….”
George Clooney: Pardon? Cat got your tongue?
Me: Ummm….. no….. It’s not what you think. …
StartNEXTPREVEnd