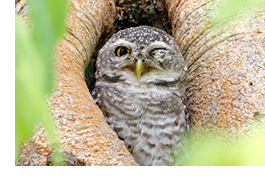 In the Battle of Copenhagen in 1801, a one-eyed man called Vice Admiral Nelson led the British fleet in a battle against a joint Danish/Norwegian army. The British fleet was commanded by Admiral Sir Hyde Parker. The two men disagreed over tactics and, at one point, Hyde Parker sent a signal for Nelson to withdraw by waving a series of flags. Nelson was convinced he could win, so he ignored these signals, and it is said that he deliberately raised his telescope to his blind eye, making sure that he would not see any signal from his superior. Nelson carried on, and, fortunately for him, managed to lead the British fleet to victory.

Examples
– I knew Hugo was stealing the cookies, but I turned a blind eye because he is my sister’s child.

– We’re not supposed to park here, but the authorities usually turn a blind eye.

– The neighbourhood children were taking apples from the farmer’s apple tree, but the farmer turned a blind eye because he knew they were poor and hungry.