An Apple a Day Keeps the Doctor Away: Origin and Meaning

Meaning
This proverb means that eating an apple each day keeps you healthy – apples are so full of vitamins and nutrients that if you eat one every day, you will not become sick and you will therefore not have to visit the doctor.
Origin 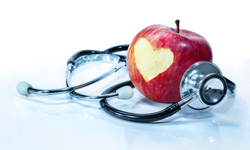 Apparently this phrase originated in Wales and was first recorded in the 1860s. The original saying was “Eat an apple on going to bed, and you’ll keep the doctor from earning his bread.” By the early 20th century this had been modified to “an apple a day, no doctor to pay,” and it was not until 1922 that the phrase became what we say today: “an apple a day keeps the doctor away.”

The idea of eating apples for health has existed for over a thousand years, dating back to Ayurvedic medicine in Southern Asia. Recent studies have found that eating an apple a day helps significantly reduce levels of bad cholesterol. So munch on an apple – it’s good for you!
Examples
Francesca: “I always have an apple in my packed lunch – an apple a day keeps the doctor away!”

George: “Poor you, you have a horrible cold – you should eat as much fruit as possible!”
Tyra: “Actually, I eat an apple and orange each morning, but I feel terrible! If an apple a day keeps the doctor away, maybe I’ve been eating the wrong type of apples!”