A Chicken and Egg Situation: Origin and Meaning

Meaning
a situation where it is impossible to decide which of two things existed first, or which caused the other.
Origin 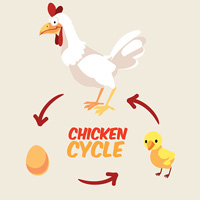 Throughout history, philosophers and scientists have confronted the dilemma “which came first, the chicken or the egg”? To ancient philosophers, this problem was at the centre of their questions as to how the universe and life on planet earth began. Aristotle (384 – 322 BC) concluded that both the bird and the egg must have always existed; “For there could not have been a first egg to give a beginning to birds, or there should have been a first bird which gave a beginning to eggs; for a bird comes from an egg.” However, more recently, scientists such as Stephen Hawking have argued that the egg came before the chicken. In common speech, we use the term a chicken and egg situation to point out that it is impossible to identify the starting point of a circular cause and consequence. For example, in order to get a job you need to prove you have accommodation, but often without accommodation you cannot get a job, so it is hard to know if the cause of the problem is the lack of accommodation or the lack of job. When a chicken and egg situation has a negative consequence, it can also be referred to as “a vicious cycle”.
Examples
Chris: “How is the job search going?”
Olive: “I’m having a hard time – most companies won’t give me a job because I don’t have any work experience on my CV, but I can’t get any work experience until someone gives me a job – it’s a real chicken and egg situation.”

Yasmin: “I think a good mood is infectious – I’m happiest when the people around me are happy, and then they seem positively affected by my happiness.”
Theo: “Yes, I find the same thing. I think it’s a chicken and egg situation – I can’t tell you if the happiness starts with me or with other people, but joy is certainly contagious.”