Take it with a Grain of Salt: Origin and Meaning

Meaning
Don’t believe exactly what someone says to be correct; accept what they say, but don’t take it really seriously.
Origin 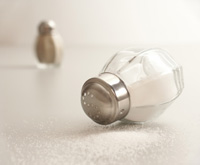 The tabloids and gossip magazines often invent stories about celebrities, so you should take what you read with a pinch of salt.

Billy: “Jade told me that her pet dog can talk and dance like just like a human. Can we get a dog like that?”
Mother: “Take what your friend says with a grain of salt – she has quite a vivid imagination and sometimes exaggerates!”