A Wolf in Sheep’s Clothing: Origin and Meaning

Meaning
A dangerous person who is pretending to be harmless; an enemy who is disguised as a friend. This idiom is a warning that you cannot necessarily trust someone simply because they appear to be kind and friendly.
Origin 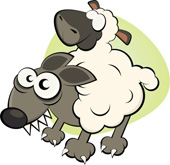 The meaning of this idiom relies on the idea that a sheep is a docile sweet creature, whereas a wolf is a sly, vicious animal who likes to attack and eat vulnerable animals such as sheep or lambs (their young). This idiom has been used for thousands of years, perhaps since the 5th or 6th Century BC, when Aesop wrote his fable entitled Wolf in Sheep’s Clothing. The fable told the story of a wolf who disguised himself in a sheep skin in order to trick the shepherd and remain in the sheep pasture until darkness, when he planned to feast on the other sheep in the field. The symbolism of a wolf pretending to be a sheep also appears in the Bible in the book of Matthew. It is written “Beware of false prophets, which come to you in sheep’s clothing, but inwardly they are ravening (hungry) wolves”.
Examples
Gail: “I met the sweetest guy at the bar just now – he promised to write me poetry and take me to Paris.”
Rob: “Oh no! I heard him saying the exact same thing to another girl! Beware of him – he’s a wolf in sheep’s clothing.”

The director of the hospital was a wolf in sheep’s clothing – she was pretending to raise money for the hospital, while all along she was taking the money for herself and buying designer handbags with it.

Angela: “Tammy’s new dog looks so sweet and innocent, but you have to be careful because he can give a ferocious bite.”
Nick: “Oh yes, I’ve heard he’s a veritable wolf in sheep’s clothing.”