The January Doldrums: Origin and Meaning

Meaning
A feeling of low energy and lack of motivation that sometimes occurs during the dark days of January after the Christmas and New Year season of celebration.
Origin 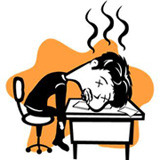 Nowadays being in “the doldrums” means a feeling of low spirits and lack of energy. The exact origin of the word “doldrums” is not certain, though it is believed to be related to the Old English “dol,” which relates to the modern word “dull” or “boring”. However, “the doldrums” experienced by sailors are usually of a different variety. In the mid-19th century, the word once used only for a feeling of low energy started to be used to describe certain tropical regions of the ocean which have no strong winds. Boats, needing wind to push them, struggled to travel onwards in these regions, leading to long, difficult journeys.
Examples
“To fight the January doldrums, some people try to take a sunshine holiday at the start of a new year.”

“If you want to beat the January doldrums you should make some fun plans to meet up with friends and do something cheap and cheerful.”