In a Nutshell: Origin and Meaning

Meaning
In only a few words / concisely
Origin 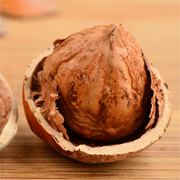 A nutshell is the hard outer casing of a nut, which protects the edible nut inside. A nutshell has enough space to contain something small – therefore “in a nutshell” has come to mean “in a small number of words”. It is believed that this idiom may have been created nearly 2000 years ago, when the Roman writer, Pliny, described a copy of Homer’s Iliad as being written so small that it could fit in the shell of a walnut. Around 1600, Shakespeare’s Hamlet also used the phrase, exclaiming “I could be bounded in a nutshell and count myself a king of infinite space, were it not that I have bad dreams”.
Examples
“In a nutshell, the film Titanic is about a ship that sinks.”

“The Sunday Newspapers often include a page explaining the biggest news stories of the past week in a nutshell.”

“This is our business plan in a nutshell – we want to make delicious food and sell it to hungry people!”
StartNEXTPREVEnd